“In Diana Raab’s ‘imaginary world . . . people drip with stories / and linger in bookstores and cafes / slurping foamy cappuccinos / and nibbling chocolate cake.’ And the poems in Dear Anais are, indeed, rife with both stories and the extravagantly various things of this world:

Laundromats and writers’ conferences, steel-tipped boots and champagne, patched jeans and paramedics, blueberries and autographed photos of Paul Newman. While the book does pay homage to Anais Nin—to her eroticism and wry humor and exquisite journals—it also vividly evoke’s Raab’s own life, particularly her family memories. Like Nin, Raab is indefatigable in her desire to commit one woman’s life to paper.”

~ David Starkey, author of Ways of Being Dead

“Diana M. Raab’s Dear Anias: My Life in Poems for You is not only a tribute to the late diarist, but also a tribute to diaries themselves. Each of the book’s poems, culled from Raab’s own journal, offers intimate portraitures, tiny memoirs in verse. Raab’s poetry is seductive in its earnestness, appealing in its vulnerability, mystery, and enchantment.”

“Raab’s skill is as a poet, but her passages are as intimate as a diary. She reconstructs her past mirroring Nin’s emotional honesty. The reader never feels voyeuristic reading the intimate passages, but feels like a confident, friend and maybe even a lover.”

“Through her poetry, she became closer to a woman she had never even met. ‘Dear Anais: My Life in Poems for You‘ is a correspondence to Anais Nin, whose writing is scattered throughout several publicly released diaries and journals. Raab now offers her correspondence to Nin through remarkable verse. ‘Dear Anais‘ is well worth the read, recommended. ‘Toast’: Pour the champagne;/clap for the exuberances;/bow to the accomplishments;/ and flush all the sorrows.”

“. . . I’m thrilled to say that Raab’s use of language in a format that resembles diary entries is fantastic. The volume begins with a letter to Anaïs about how she inspired Raab through her journals, particularly Anaïs’ entries about the house Eric Lloyd Wright built for her. Each poem provides the reader with an insider’s look at Raab’s life and her interactions with family and others. Mirroring Anaïs Nin’s style, Raab seeks to demonstrate how important love is to humanity and maintaining our connections to one another.” 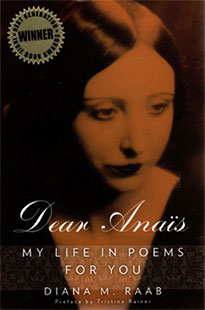